What does it take to pursue your dream?

But it takes one more thing—guts. It takes guts to take a risk. I mean, really, who would have ever thought I could publish a book? Much less leave a job to pursue some wild and crazy dream. It would have been easier to stuff that dream and stay in that dusty classroom. But I took a risk. And believe me, people laughed. Which hurt. There were bumps and ruts and hairpin curves along the way. It wasn’t a ski lift ride to the top I can assure you. Heck, I’m not at the top yet. Maybe I won’t ever be. But I love writing. I love pursuing my dream.

I remember when my son first started fencing. He was five and when I’d asked what he wanted to do–soccer, basketball, baseball–he’d answered with fencing. So first I had to find a fencing club. After his very first lesson, he climbed into the car all hot and sweaty and with a great big grin said, “I’m living my dream!”

My daughter’s experience with singing was not quite the same. She LOVED to sing and she sang everywhere. But by the time she was six or seven she was starting to get shy and wouldn’t sing in front of others. That would be okay except my daughter had a pretty good voice. And she loved to perform. So when she was eight, I forced her (mean mommy that I am) to take singing lessons. She cried every week, saying, “I don’t want to do the recital.” At first I’d say, “Well, it’s seven months away.” But then I finally said, “We’ll get through the recital and then you can quit if you want.” Well, of course, my performing daughter LOVED it. And each year brought more and more confidence until she is really amazing. She makes it look easy now but it wasn’t. It took guts for her to go to voice lessons each week. It took real courage for her to get up on that first stage and sing. I’m so proud of her for even trying. And it takes real courage for my son to put on his fencing equipment and face the blade of another fencer. And yes, it’s a dangerous sport.

There are ups and downs along the way. I’ve achieved a few things and I’ve failed at others. That’s life. My son has won some tournaments and lost some. My daughter has gotten some parts and not others. But we keep trying. It all goes back to that first risk when I decided to be a writer, when they decided to fence and sing.

So are you gutsy or wimpy? 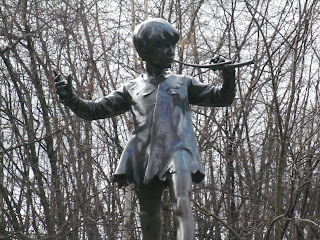 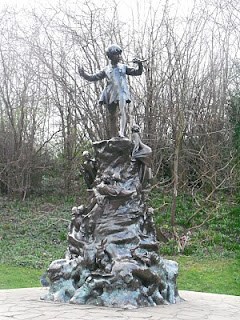 One of my favorite stories is Peter Pan by J. M. Barrie, and so our first day in London we headed to Hyde Park where there is a statue of this wonderful character. It was quite cold that day, and we had to wear jackets to ward off the cold wind. It even decided to spit rain on us, but we were not deterred in the least.

By the way, a little added piece, a friend on FB gave me this link today about replicas of this statue around the world! Think we should go on a scavenger hunt for Peter Pan? Check this out: http://www.publicartaroundtheworld.com/Peter_Pan_Statue.html