I wonder if Robin Williams knew how loved he was? Did he know how much he would be missed? Look at the outpouring of love this week in the aftermath of his untimely death, I wonder if he knew. I suspect he didn’t. I suspect he couldn’t see beyond the pain he was feeling.

The darkest time of my life came after the birth of my second child. I had two babies—a toddler under the age of 2 and a newborn. And I was depressed. I don’t mean I was tired and weary. Yes, I was. But I was truly depressed. It was a very dark time. On top of that, I felt guilty for the depression. After my firstborn was delivered, I felt euphoric. I was elated to be a mommy finally. So, it was hard for me to accept that after my second was born, I faced crazy tears and a darkness I had never experienced. Where was the joy over this new and healthy baby? Thankfully, I spoke to my doctor about my unusual feelings. We quickly realized that it was the birth control pills I went on right after her birth. All those hormones wreaked havoc on my system. I immediately got off the pills and my hormones regulated themselves. The storm clouds cleared. Sunshine returned.

Depression comes in all shapes and sizes. For this optimist, it was a shock when I experienced it but it was also quite a shock to watch my father go through it after his heart surgery. It’s a common phenomenon for heart patients or anyone who has had a serious ailment to go through depression. My dad was like John Wayne–strong, confident, steady. And yet, to watch him go through depression was heartbreaking. Even more shocking to me was the lack of response by his heart doctor. My mother would slip a note to the nurse during a doctor visit telling her how depressed he was. The doctor would come in and say, “Are you depressed?” My father, being stoic and never accepting what he perceived as weakness, would deny it. And nothing would be done to help him.

My mother is also very calm and steady, so it was also a shock when she realized several years ago that she was depressed. She was unflappable during her bout with breast cancer. Her doctor kept asking her if she was depressed during follow-up visits because some medication she was on could cause depression. One day, my mom was watching Grumpy Old Men, a comedy, and she cried three times. That told her something was not right. Thankfully, she sought help.

Depression can be caused by hormones or medication or traumatic situations. Some people have an illness, which is depression, and there are all sorts of manifestations of that. Unfortunately, I have also known those who have not sought help. Robin Williams’ death by suicide brought that home to me again this week. I ache for his family and friends, because I too had a friend who committed suicide. I have asked myself all the questions that follow. Did I…Could I…Why didn’t I…What if I’d…? There are no answers to those questions only a lingering pain. I simply understand the deep ache of what they are now facing. Suicide doesn’t just affect the person that takes his or her own life. Suicide devastates families and friends. There is not a week that goes by since my friend’s death (and it’s been 3 years) that I don’t think of my friend, of those last moments in her life, and wish I’d been able to help.

This morning, I was reading out of the book of Job. Surely, if anyone had reason to feel depressed and hopeless, it was Job. All of his children had died. His wealth had been taken. His health was failing as he suffered boils on his body. He was in severe pain. Friends came to see him, trying to help and also accusing him of sin in his life, which they believed caused his suffering. Job 3 is Job’s lament. “Why didn’t I die as soon as I was born…” “Instead of being alive, I would now be quietly lying down. I would now be sleeping peacefully. I would be with the kings and the counselors of the world who built for themselves what are now ruins…. I would not exist…I have no peace! I have no quiet! I have no rest! And trouble keeps coming!”

Surely, Job was in a desperate situation. He was in a very dark place. He needed help. He needed hope. Let’s skip over what all his friends said to him in response. Because what really matters is what God says to him in chapter 38. “Then Yahweh answered Job out of the storm… “Where were you when I laid the foundation of the earth? Tell me if you have such insight.” Later, God says, “Will the person who finds fault with God correct him?” Finally, Job responds to God with, “I know that you can do everything and that your plans are unstoppable.”

Life is temporary. Eternity is forever. The suffering we feel here on earth does not last forever. It is a season. There are answers and solutions to any problem. God has the answers. He can work miracles in our lives if we will but allow Him.

For those who cry when others are laughing…if your life feels dark and hopeless…if you think about ending your life…reach out to a friend, a family member, a professional doctor, nurse, anyone. I know it’s scary. I know you feel as if no one will care. There is someone who wants to help. Please, reach out and get help. You do not have to live with tears or loneliness or darkness. Reach out. Get help. If you haven’t reached out to God, then do so. People make mistakes and fail each other, but God loves you. Always. Let me repeat that. God. Loves. You.

For those who have been left behind by someone they love who took their own life, it’s okay to walk through all those stages of grief: sadness, anger, etc… There are organizations that can help you in the aftermath. Get help. But also, reach out to God. He understands your pain, your suffering, and He wants to help you through this very difficult time.

For those who do not face depression (yet), please remember that no one knows what situation another faces, what resides in another’s heart or the pain another suffers. Looking at Robin Williams, it would be easy to assume that his success, his laughter, his life would cause happiness. It’s never that simple. Be mindful that others are hurting and reach out to help, listen for clues that someone needs help or is asking for help, and most importantly simply love each other.

For those who have gone on, who found this life too painful, too dark, you are not forgotten. You are loved. You are missed. 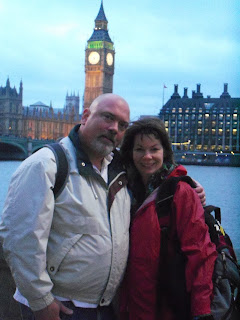 We had a fabulous time in London, where we not only saw so many things in and around London, like the Imperial War Museum, National Gallery, National Portrait Gallery, Tower of London, Victoria and Albert Museum, Westminster Abbey, St. Paul’s where we took part in the Eucharist on St. Patrick’s Day, Les Miserables and Billy Elliot, National History Museum, British Museum where we saw the rosetta stone, and British Library where we saw the Magna Carta, but also we traveled to Oxford and Stonehenge and Edinburgh. It was a fabulous trip. My favorite things were: seeing Les Mis again, this time with one of my favorite performers: Simon Bowman, who was fabulous as Jean Valjean, going to Stonehenge where we missed all the crowds, and seeing the British Library and Jane Austen’s writing desk. We came back last Monday and I was sick. I had gotten sick with a cold or virus or some such and it turned into pneumonia. So I’ve spent the last week trying to recover, taking care of my son who also got the crud, and also working on line edits for Forsaken. Today, I get back to work on Forbidden, book #2 of the Plain Fear Series. I’m very excited about this book and getting really excited about the launch of book #1, Forsaken, which comes out in August.

Here’s a picture of hubby and me in London. We could hear Big Ben chiming 6 o’clock.