Thirty-five years. Seems unreal that much time has passed since Elvis’s death. I distinctly remember that day. It was a hot, August day in Dallas, where I lived. I was still a schoolgirl, but my older brother had introduced me to Elvis’s music that summer.

My brother was home that summer from college. He’d call me into his bedroom and play You Ain’t Nothing But a Hound Dog for me. Then he’d call his girlfriend (who later became his wife) and without saying ‘hello’ or ‘how are you?’ he’d signal for me to put the needle on the right groove. Elvis’s voice would boom out of the speakers, and we’d laugh together. It was one of those rare moments, a bit silly now looking back and of course very immature, and yet I treasure it. My brother and I, separated by seven years, were not all that close growing up. I idolized him, cheered for him at all his football, baseball, and basketball games, and yet he was off doing teenage things from the time I was little. To me, he and his friends were like rock stars, and I had crushes on all of his friends. So somehow my love for Elvis’s music is tied up in all of that childhood adoration for my brother.

That adolescent love for my brother and for Elvis was like a shiny toy, glittery and sparkly. When on August 16, 1977 I heard the tragic news of Elvis’s death, it felt like that pretty gift, wrapped in the innocence of childhood, was smashed.

I remember going to a school event that day and saying to someone, “Did you hear the news?” But most of my friends hadn’t. And to most of them it meant nothing. Some didn’t even know about Elvis. It would take me thirty-five years to understand how Elvis was tied up with my own emotions for my brother. I even wrote a book about Elvis called Elvis Takes a Back Seat, and looking back at the metaphors and symbolism in that book, I can see now that the death of Elvis began the dethroning of my innocence.

Do you remember when Elvis died? Did it impact you? What event shattered your world as a child? 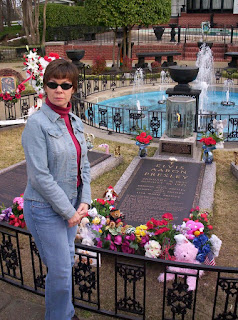