I have such fond memories of Halloween when I was a child. First of all, it’s a week after my birthday so that cake-induced fog of happiness still lingered followed by the chocolate haze of Halloween candy. Many of my birthday parties were costume parties, which gave all the attendees an extra opportunity to wear those plastic scary masks. Do you remember some of your favorite costumes? One year I was a dog. Yes, a puppy dog. My mom sewed a dog costume out of faux fur. And let me tell you, it was HOT! My mom always dressed up as a witch with green makeup and a black hat. One year I was Princess Leia, back in the days when my hair was long enough to do the fun hairdo! Another year, I borrowed the Darth Vader mask that my sister made. Yes, made. That was back in the day when they didn’t manufacture them. Another year I was a vampire. Hmmm….a premonition of my future?

Of course, as I got older and had children of my own Halloween became complicated, especially as a Christian. Some people said it was evil. There were lots of discussions. Many of my friends with children chose not to ‘celebrate’ Halloween. I never really thought of it as celebrating but as a great excuse for a party. And so, we as a family chose to dress up and have fun. When the kids were really little, we went to a fabulous pumpkin patch every year. The kids loved running through the rows and rows of pumpkins. But then we discovered my son was allergic to the hay strewn about and we had to stop that tradition. Still, we’ve enjoyed carving pumpkins and roasting the seeds. We usually had happy costumes, like a clown fish (before Nemo came along and my mother made him a fabulous costume), a car (which my sister made for my son out of a box and painstakingly painted), a honey pot (which kept knocking my poor baby over). Now, my kids like to be Katniss and crazy scientists. It’s fun. It’s light-hearted. And it’s a great time to walk through the neighborhood and visit with neighbors. 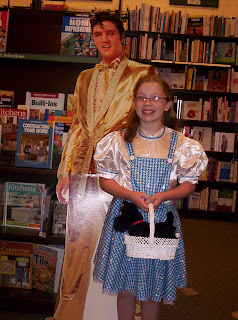 This is my daughter a few years ago dressing up as Dorothy for one of my booksignings for Ruby’s Slippers. 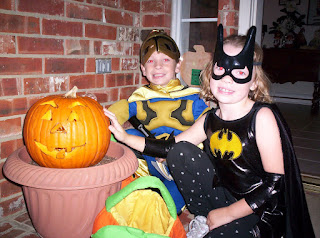 This was a super hero kind of year! 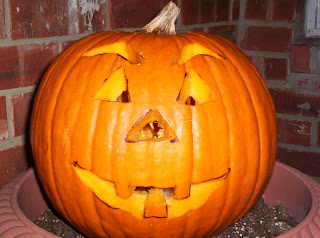 No matter what kind of Halloween you have, I hope it’s fun and safe.