The Olympics are over. Even though not having the Olympics on what seemed like 24/7 frees up much of my time, I still miss it. One of my favorite commercials during the Olympics was seeing the wannabe swimmer, who watched a race on her iPad and then wrote the time her hero achieved on a write-on board. Here are the five ways the Olympics help me.

1. Inspiration spurs us to make goals. Goal setting is important and watching these athletes is like watching goals in action. Sometimes those goals are not met, and yet sometimes more is achieved than anyone thought possible. But watching these athletes reach for their goals, reassessing and readjusting those goals, is a great lesson for all of us. For me, it is truly inspiring to see an athlete standing on the podium, receiving a gold medal, and becoming teary eyed during the Star Spangled Banner. My goals may not be their goals, but learning from these amazing individuals can push me to be better than I ever thought I could be.

2. Even though I’m fairly sure I’ll never be an Olympic athlete, watching the Olympics can push me to workout just a little harder, push through those times when I’d rather get off the treadmill or forget about lifting weights or turn back for home sooner than I should. These athletes amaze me. They push through tough times, heartache, depression, and difficulties. They fall off an apparatus, dust themselves off, and get back up. Sometimes I’m too ready to give up. Watching these amazing athletes pushes me forward when I’m ready to give up.

3. The Olympics remind me that ordinary people can reach the extraordinary. And it can be amazing.

4. Behind all those amazing moments seen on television when it all comes together for an athlete are hours upon hours of preparation, hard work, and dedication. They didn’t decide that week to be an Olympic athlete. They made the commitment to their goal years and years before that moment. They dedicated thousands of hours of work to their goal. They sacrificed many things. It takes commitment, dedication, and sacrifices to achieve so much.

5. Setting measurable goals help us reach for the seemingly impossible and make them possible. Start small and build. Once you reach a small, measurable goal, then make the next step. One at a time. Goals build upon each other.

Taking my last breath, I kicked the water as hard as I could, and I stretched my arm for the wall. When I touch the tiled pool and sputtered to the surface, I realized I hadn’t won the race. A race against my grandfather. But in my mind, when I was just about seven years old, it had been against Mark Spitz. Then a few years later, I stood poised on the edge of the wooden beam, my balance steady as I made my dismount and landed, feet firm, on the mat. Surely, it was a routine worthy of a 10, just like Nadia’s. But only (again) in my mind.

Have you ever challenged an Olympic champion? I hope I’m not the only one with a crazy imagination. So maybe I wasn’t Olympic material. When I participated in sports, in my mind’s eye I was competing against the very best, striving for my very best. That’s what the Olympics is about: going for the gold. But it’s also so much more than that.

Mark Spitz. Nadia Comaneci. Scott Hamilton. Michael Phelps. Jackie Joyner-Kersee. Mary Lou Retton. All of these very gifted and yet different athletes from separate Olympic games were champions, and they inspired me to be my best in whatever sport or activity I attempted. Sometimes I hit the mark, sometimes I missed it by a mile. But the point isn’t always achieving; the point is reaching farther than you ever dared dream possible.

This weekend marks the beginning of the 2012 Olympics in London. I cannot wait! I love the Olympics. I love the ‘up close and personal’ stories of people going for their dreams against all odds. And so many of the athletes we’ve cheered for over the years have faced disappointments and difficulties along the way.

Do you remember Olympic speed skater, Dan Jansen, who lost a sister? He kept trying, kept reaching for that dream. What about Olympians who suffered injuries? Or lost coaches? Or worked two jobs to pay for their training? So many stories. So many triumphs. I can’t remember all of their names, not all won the gold or even a bronze medal. For me, the Olympics aren’t just about who gets a medal placed around their neck. But it’s the triumph over tragedy. It’s the dusting off disappointments and trying again. It’s the buoyant human spirit. 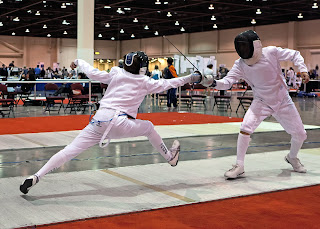 This is a picture of my son fencing at USFA’s National Fencing Tournament in Reno, NV last year. He inspires me, because he never gives less than 110%.

So are you an Olympics watcher? What’s your favorite sport to watch? What athlete has inspired you?