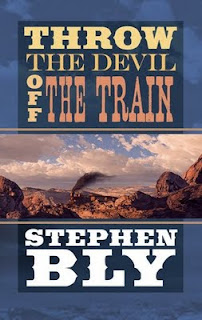 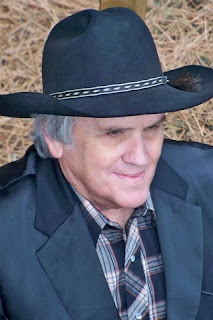 It’s 1880.
Catherine’s got to escape from her hometown in Virginia. She heads west to marry a childhood friend she hasn’t seen in 17 years. She needs a fresh start and he’s got a booming business in Paradise Springs. She’ll do almost anything to get there. . .except reveal her true last name.
Race heads west set to avenge his brother’s death, with a body aching for sleep, and determined to avoid the conniving lady with a throw-away heart. But it’s a long, cramped, chaotic train ride from Omaha to Sacramento.
The only thing these two agree upon: they despise each other. And something evil’s on board. As they gnaw on each other’s nerves, a holdup, hijack, kidnapping and gold mine swindle shove them together, then push them apart. Fiery, opinionated and quick to react, can they team up long enough to throw the devil off the train?

AUTHOR BIO:
Stephen Bly is a Christy Award winner for westerns and author of 105 books of fiction and nonfiction, some of them co-authored with wife, Janet. They live in north-central Idaho at 4,000 ft. elev. on the Nez Perce Indian Reservation. They have 3 married sons, 4 grandchildren, and 1 great-grandchild.

Throw The Devil Off The Train can be ordered through your favorite local or online bookstore, such as www.Amazon.com. It’s also available through http://BlyBooks.com

Many of you have asked me. . .well, only one, maybe two. . .for my world famous recipe for chili. This is an expected and anticipated dish at every Wild Game Feed potluck at our northern Idaho church each November. It’s also a staple at our Broken Arrow Crossing events in the summer. Broken Arrow Crossing is the false-front town I’ve built beside our house. Wife Janet calls it our ‘theme yard.’

So, now the secret’s out. You can create your own chili sensation, Bly-style.

Ingredients:
2-4 pounds of elk meat (for my pals in Quebec, that’s Wapiti meat)
1 16-ounce jar of Pace salsa (“medium” for most gringos; I prefer “hot”)
2 cans of Hormel Chili With Beans (life is too short to wait for beans to soak)
1 green bell pepper (make sure it’s crisp…the red or yellow bells will work good too)
Several fresh jalapeno peppers (don’t wimp out; leave the seeds)
An unending supply of Montreal Steak Seasoning
Red Tabasco Sauce

Directions:
Apply for an out-of-state elk tag from the Idaho Fish & Game Department. Clean your Winchester 1895, 405 caliber rifle. Fly to Idaho and camp deep in the forest along the upper stretches of the north fork of the Clearwater River. Shoot your elk (whether you taxidermy the head or not is your decision). Pack meat in dry-ice and take it home with you on the plane. OR. . .accept that package of wild game meat your brother-in-law keeps trying to give you every Christmas.

The night before. . .put one cup of water, 2-4 pounds of elk (steak or roast) in the crock pot. Season with Montreal Steak Seasoning to taste. Turn that sucker on low, then go to bed.

Sometime the next day. . .drain most of the juices off the meat (yes, you can make elk gravy for breakfast, provided you don’t put it on biscuits that come out of a tube). Place meat in very large pan (the one on the bottom shelf at the back that takes forever to yank out). Dump in your two cans of Hormel Chili Beans (or more if you’re feeding the starting offensive line of the Green Bay Packers, or their equivalent). Important note: never use cheap canned beans that taste like they were soaked in fast food restaurant catsup.

Gut out your bell pepper and carve it into ½ inch squares, then sauté (that means fry ‘em in a skillet, but don’t burn ‘em black or let ‘em get mushy). Toss them in the big pan.

Cut the stems off the jalapenos, quarter them and toss them in. If your fingers blister while cutting the peppers, you have to invite me over for supper. Add a bunch more Montreal Steak Seasoning (bunch=6 tads) and red Tabasco.

Stir everything together and simmer the chili for an hour or so. (Simmer is what happens when you ought to throw another log in the stove, but you wait until half-time of the football game and the fire almost goes out.)

Now, it’s time for the taste test. After stirring the chili again (wooden spoons seem to be less susceptible to corrosion), take a small taste. You may want to add more Tabasco. (Note: if an obnoxious nephew is visiting, let him test the chili. It’s about right if he spends the rest of the day out in the yard with his head buried in leaves, sand, or snow.)

Serving size: this varies. Most times, the bowl is scraped clean with only 10 to 12 people. But, with luck, there will be some leftovers and you’ll get to have it cold for breakfast for several days.

NOW AVAILABLE! Throw The Devil Off The Train, western romance by Stephen Bly

Order through your local bookstore, your favorite online bookstore such as www.Amazon.com or get an autographed copy from http://BlyBooks.com/store.htm